“On Ursulines Street, a haven for a pair of French Quarter artists to write, create images, dream” 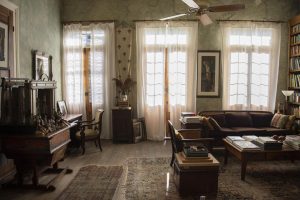 When Dalt Wonk and Josephine Sacabo moved back to America from France in 1973, they chose to settle in the city that would cause the least culture shock. That was New Orleans and, specifically, the French Quarter.

“The Quarter was a wonderful place to live in the early 1970s,” Wonk said. “There were writers and artists and musicians, a creative scene, because it was a cheap place to live. Rents were as little as $10 a night to $100 a month. It was the most European of American cities, and it’s why Josephine and I have been so happy.”

Wonk and Sacabo have never stopped making art of one kind or another since they arrived here as 30-somethings 45 years ago.

Sacabo is a photographer whose ethereal images are exhibited at Joshua Pailet’s Gallery for Fine Photography. Wonk is a playwright, journalist and illustrator. Together, they are the founders of Luna Press, an outfit dedicated to producing illustrated works that explore the relationship between words and images.

Wonk’s newest is “Spiritual Gifts,” a collection of short stories about life in the French Quarter, illustrated by Simon Gunning. “Beyond Thought” is Sacabo’s visual response to the writing of Brazilian author Clarice Lispector; “Lux Perpetua” was inspired by the life and poetry of 17th-century Mexican nun Sor Juana Inés de la Cruz, who advocated for women’s rights before being silenced by the Inquisition.

Their exquisite home on Ursulines Avenue isn’t the only fabled French Quarter property where the couple has lived. For 25 years, while they were raising their daughter Iris, they were in residence at the Old Spanish Stables on Governor Nicholls Street.

“We had an upstairs apartment, and it was just wonderful,” Sacabo said. “Patricia Chandler, the art consultant, lived downstairs, and our children grew up together.”

“The man who owned the stables would renew our lease for 10 years at a time, until one day, he told us he just couldn’t because his third wife didn’t want him to,” Wonk said. “The handwriting was on the wall, so we really needed to start looking for a new place.”

“My father had died in Laredo about that time, and my mother wanted to buy me a house with the proceeds from his estate,” Sacabo said. “There was only one place that really appealed to me, but my friends who lived nearby told me the owner would never sell.”

Maybe not, but what they had not counted on was that he would pass away. Sacabo immediately contacted his sister, who was eager to be done with the property.

There are two buildings on the lot on Ursulines Avenue: One is the main building, with studios on the ground floor. The other is a two-story service building at the rear of the lot, separated from the main house by a small courtyard with a pond and Wonk’s beloved Koi fish.

It takes climbing a long flight of stairs to the second floor to experience the couple’s living quarters: A living room, dining room, eat-in kitchen, bedroom and bath.

The living room features comfortable caned furniture with upholstered cushions in dark purple and green velvet, as well as bookcases built by the couple’s friend, Ersy Schwartz. According to Sacabo, Schwarz was a great problem solver who never hesitated for a second to help friends. A faded oriental rug on the floor and an antique marionette theater add visual interest to the room.

Step through the shutters at one end of the parlor and you’ll find yourself on a long balcony that extends the full width of the house.

The main bedroom also opens up to the balcony. It features a high-back bed, composed of two smaller metal beds welded together. Crisp white linens, embroidered and having open work, serve as a coverlet, and vintage velvet curtains with patterned braid cover the windows. A painting of an angel looking skyward, multiple retablos and santos, along with 13-foot ceilings create the feeling of visiting a European villa or ancient Italian Palazzo.

In the dining room, adjacent to the living room, vintage leather chairs surround the dining table, and an exotic bird cage (one of eight left behind by the previous owner) stands in the corner.

The kitchen in the house is long and narrow and features fanlight-topped casement windows that open to the courtyard. It’s an eat-in kitchen, so there’s a wooden table in the center of the room surrounded by chairs Sacabo bought on eBay. An exotic tableau at the far end the kitchen features a tea poster made in France dozens of years ago.

The bathroom is immense and features in an old-fashioned marble top vanity, surrounded by dozens of black and white family photos on the walls.

If any house has a layered look, it’s this one. The layers begin with the plaster walls that have been painted to create the illusion of mottled stone.

“At first, we tried milk paint and the process went on and on,” Sacabo said. “Then we wised up and used latex paint and water, put on with rags. Still, we repainted the living room three or four times, and it really didn’t look right until we moved the furniture in.”

There is visual stimulation everywhere: religious iconography on the walls, tiny sculptures by Schwartz. Loads of books nearly spill out of the built-in bookcases in the living room and elsewhere. Paintings by Mimi Stafford, illustrations by Wonk, photographs by Sacabo, tribal masks, and papier-mâché figures join together to create the all-original environment.

As visually arresting as the houses is, the two studios at the ground level of the home offer the best insight into each artist’s contributions.

Sacabo’s consists of a darkroom for developing film and making prints, plus a second space where she lays out pastels in colorful rows for tinting her black and white photography.

Wonk’s studio, by contrast, occupies one large room that stretches from the back of the building to the front.

“Josephine doesn’t like what she calls the ‘chaos’ in here,” Wonk said.

There’s a fine line between visual chaos and visual stimulation, and Wonk’s studio dances along it gingerly. An enormous circus-like poster dominates one wall, a gift from Sacabo that honors Wonk’s childhood career as an impresario of magic.

“When I was a kid, I used to love magic, and I would put on shows for my friends,” he laughed and pointed to a old photo of himself. “I was the Great Ricchi.”