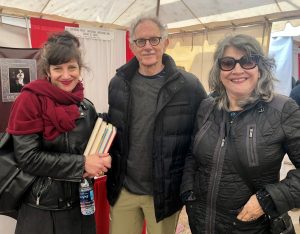 Like many good ideas in New Orleans, Luna Press began over drinks on a French Quarter balcony. Photographer Josephine Sacabo and her husband, writer Dalt Wonk, recalled a visit with Mexican guests, during which discussion turned to founding a publishing company.

“But what we would call it?” Wonk asked.

“One of the women pointed up at the moonlit sky and said, ‘La Luna,’ ” Sacabo remembered. A fitting name and serendipitous beginning for the publisher of such dreamy books as “Nocturnes,” with Sacabo’s moonstruck images and Wonk’s distinctive poems. And with that book, Wonk added, “We knew we could do it.”

“After a lifetime of impractical projects,” Wonk laughed, “This is the latest.”

“Someone asked me the other day, ‘Why do you take so many pictures of women?’ ”  Sacabo said. “And I said, ’That’s what I know.’ I suppose if I knew more about sculpture I’d take pictures of statues.” Her passion for literature drives these latest works.

Luna Press also published Wonk’s “Spiritual Gifts,” interconnected short stories with French Quarter characters moving in and out of one another’s lives. It originally began as several one-act plays, was reworked and performed at Le Chat Noir in the ‘80s, and has morphed into its present form over the years. The stories are accompanied by impressionistic sketches by acclaimed artist Simon Gunning, capturing the essence of these characters.

Wonk’s work, now as always, is fanciful and idiosyncratic. He’s also known for his two volumes of “French Quarter Fables,” published in limited editions by Luna Press, and “The Laughing Lady.” Now he’s working on a musical version of the tale of the Golem, from Jewish lore, along with a young composer Tucker Fuller. “It’s creepy, but I love it!”

Wonk recalls an early inspiration, a visit to meet Dr. Seuss at the New Orleans Museum of Art, at the invitation of children’s author Berthe Amoss. “One of the things he said that I took to heart was that the best things come out of left field. If I ever have a great idea for something, and you tell me it’s a great idea, it’s a disaster! But when it comes out of left field …”

In addition to their own creative endeavors, Sacabo and Wonk are celebrating the success of their daughter, Iris Cohen, who published her first novel, “The Little Clan” (Park Row, April) a critically acclaimed tale of literary life and ambition in New York. “We had a big year as a family,” Cohen said. “It was especially nice to all find ourselves in Baton Rouge for the Louisiana Book Festival My publisher had sent me, and my parents were there with Luna Press and it made the whole day such a special time to spend together and support each other. “

“Suddenly I’m the mother of a published novelist!” Sacabo said. “And it’s really good. Of course, the first time I read it, I was looking to see if there were horrible descriptions of the mother. And Iris said, ‘The mother lives in Metairie and wears spike heels. She’s not you.’ What a relief!”

Art and writing are a family affair for these three. As Iris Cohen said, “Growing up the way I did, in the French Quarter and surrounded by my parents’ friends, both artists and people for whom life was a kind of art form, definitely put me on the path to being a writer. My whole childhood was a kind of apprenticeship to literature and art. … And I love reading my parents’ books. I’m very proud of them. The books they are doing with Luna Press are so inspiring, and such beautiful objects as well.”

Luna Press works in the tradition of artisanal publishing — the most gorgeous design, the best paper, the fine printing done by Oddi Printing in Iceland. Their books are works of art.

Wonk and Sacabo have enlisted the professional expertise of others to work with Luna Press. Jacqueline Miro, Sacabo’s longtime photography model, had a background in catalogue design for New York galleries, so she became the art director and book designer. Marigny Dupuy, a friend with a background in publishing at Yale University Press and Ticknor & Fields, edits manuscripts. And Jenny Bagert, daughter of widely published children’s author Brod Bagert, is the publishing consultant.

Projects in the works include a new book by Sacabo in conjunction with her exhibit, “Tagged,” which examines graffiti and its violence toward women. The photos are on view at A Gallery for Fine Photography until Jan. 12. As Sacabo wrote in her artist’s statement, “Walking the graffiti gauntlet from my house to my studio, I am confronted by a lexicon of rampant misogyny, violence and sexual insults. The messages may be verbal but the effects are visceral. We are being ‘TAGGED’ as hos, bitches, and worse, but I am not that woman.”

Other long-term plans include publishing “The Flood State,” work by photographer Jennifer Shaw.

The Press has also published “Inventing Reality: New Orleans Visionary Photography,” by D. Eric Bookhardt, in cooperation with PhotoNOLA and the New Orleans Photo Alliance, a professional organization dear to Sacabo’s heart. That gorgeous book is an excellent survey of the work of 27 contemporary photographers in the Crescent City.