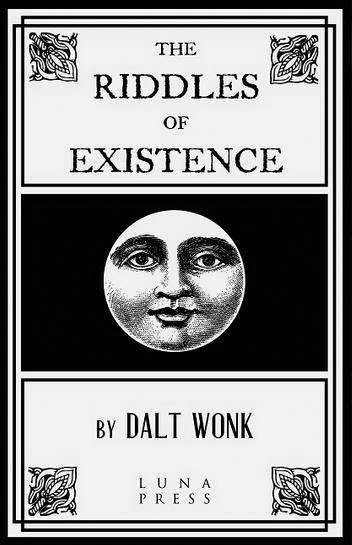 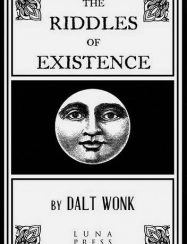 DALT WONK
THE RIDDLES OF EXISTENCE
(LUNA PRESS)
You can choose to take playwright and poet Dalt Wonk’s latest, The Riddles of Existence, at face value and treat this oversized deck of cards as a literal game, where a short verse and illustration lends clues to each card’s depicted costume, to be paired with an index on the last card that includes  titles like “The Worm,” “The Atom Bomb,” or quite vaguely, “Metamorphosis.” “The Light Bulb,” for example, is depicted as a bearded fellow with a tightly wrapped torso, accompanying filament crown and the verse “Fashioned like an ornament / although intended for a use, / I valiantly combat the dark, / but shatter at the least excuse.” (Though  all the costumes aren’t so easily deciphered.) I find this collection works best with the “rules” dismissed entirely and treated as its own tarot deck, each card a hint at some invented mythology  or divination, like a prop out of a Borgese story. The release of The Riddles of Existence is well-timed for Mardi Gras season, as it could be the perfect post-parade party game, to be enjoyed by a well-juiced  crowd—like a poet’s charades—or even alone, where one can simply keep occupied with each expressive  image (and its equally spry verse) until carnival’s excesses wear off.  —Dan Fox